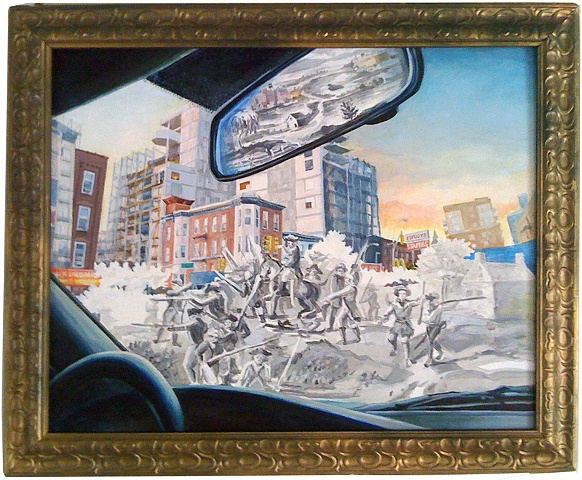 Battles of Brooklyn
Acrylic on wood with vintage frame
37" X 29.5"
< previous next >

Originally displayed in the Brooklyn Utopias exhibit at the Old Stone House, a group show I curated in which contemporary artists address differing visions of an ideal Brooklyn. Now part of the Old Stone House's permanent collection and educational materials.

Battles of Brooklyn juxtaposes historic imagery from the Old Stone House Revolutionary War displays (currently on view on the first floor) with the contemporary landscape of Fourth Avenue in Park Slope/Gowanus, as viewed from the front windshield of a car. The black and white scenes depict different stages of the Battle of Brooklyn (also known as the Battle of Long Island). This major August 1776 American Revolution battle included a march over what is now the Gowanus Canal near Union St. (an image of historic Gowanus is shown in the rearview mirror). It culminated in a decisive standoff at the Old Stone House (depicted in the front window), where American troops were badly outnumbered by British soldiers and forced to retreat from Brooklyn. However, their bravery and tenacity in defending the Old Stone House became an inspiration for General George Washington to continue fighting for independence.

In the painting, encroaching upon these historic visual references is a full-color montage of new condo developments, traditional brownstone architecture, big box stores, fast food chains, and mechanical repair shops along Fourth Avenue. This alludes to various “battles” taking place today over the ownership and redevelopment of Brooklyn, based on competing visions of a “Utopian” Park Slope/Gowanus: including those of corporations, real estate developers, historic preservationists, small business owners, and community groups. For example, the luxury high-rise construction boom along Fourth Avenue poses a potential threat to Brooklyn’s historic character and diversity. Gowanus Canal stakeholders are also “battling” over how best to facilitate its toxic cleanup.

The car window in the painting not only serves as a framing device; it suggests a sense of detachment from some of these “battles:” from both the bloodshed of wars once fought on home soil, and from political activism in Brooklyn today—perhaps the it even suggests a sense of complacency. The car imagery also suggests the isolating and homogenizing influence of suburbia, as structures like insular housing developments and chain stores increasingly take over the landscape.