A commission by Root Hill Cafe in Brooklyn, NY, for its outdoor wall at Carroll St. between 4th and 3rd Avenue. The design incorporates a background based on the specific Gowanus canal scenery seen from the bridge at Carroll Street (a few blocks west of Root Hill) but incorporating the design and technology from the café’s interior as a substitute for the industrial structures lining the canal. The foreground includes three different types of tables from the café. In the middle ground, Root Hill’s coffee grinders and espresso machines form an alternative industrial skyline based on an “industry” of coffee production. This is meant to suggest the importance of neighborhood cafes as a rejuvenating force in the Gowanus area; Root Hill provides a haven for local residents to work and play and a reason to move to the neighborhood, not to mention an essential ingredient to most people’s productivity: caffeine.

The animals who enjoy this alternative “Gowanus café” environment (serving in the mural as baristas/coffee makers, designers, and café patrons) are all wetland-ecosystem animals who could have inhabited the Gowanus Canal in its original marsh state, before industry rendered the waters too polluted to support most life. My choice to include native canal animals subtly references Root Hill’s role as an independent, community-oriented new business that nurtures, rather than displaces, the existing talent of the neighborhood. It also references overall efforts to clean up the canal, and create a more livable neighborhood. The animals include: A squirrel holding a coffee bean instead of a nut; a turtle (café server perhaps) carrying a coffee cup on its back; a croaking toad participating in an open mic night; a fish and crayfish sitting at the front table writing and reading the paper (the crayfish “clipping” out coffee coupons with its claws), an oyster on a plate with a shell containing a coffee bean instead of a pearl, as a reference to the original oyster trade that once took place on the Canal; a raccoon barista delivering a cup of iced coffee to a heron; a family of ducks relaxing on a dock-like structure shaped like a Root Hill table; and a beaver working on building the “dam”/partition on the right. Another mammal’s paws type at the laptop in the nearest foreground.

The colors of the grass, water, bar, and buildings are all based on the colors of walls, brick and furniture inside Root Hill. The color of the sky is loosely based on the logo of Blue Sky Bakery, which supplies Root Hill’s pastries; the clouds in the sky suggest the shape of Blue Sky muffins. The words “Root Hill Café” and "Gowanus, Bklyn NYC" appear on the right-most building in a style that alludes to both local graffiti and the Root Hill logo. The laptop screen on the right serves as a space where the café can post rotating flyers or other information.

On the right-most fire escape on the third floor, the café owner’s dog stands with the former landlord of the building. They enjoy the coffee aroma that wafts up from the mug in the lower foreground, and also overlook the neighborhood scene that they are both helping to nurture through their work in the café. 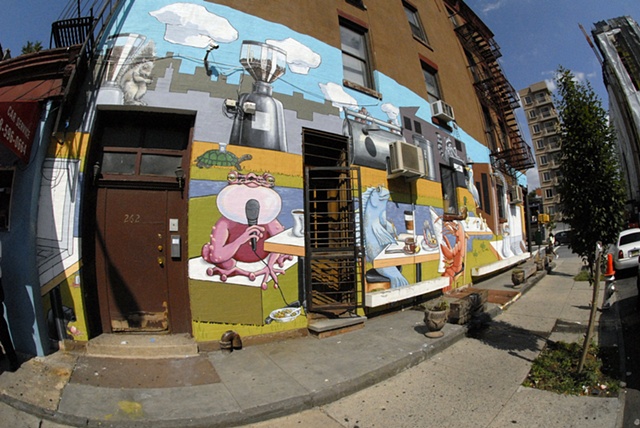 View down the block 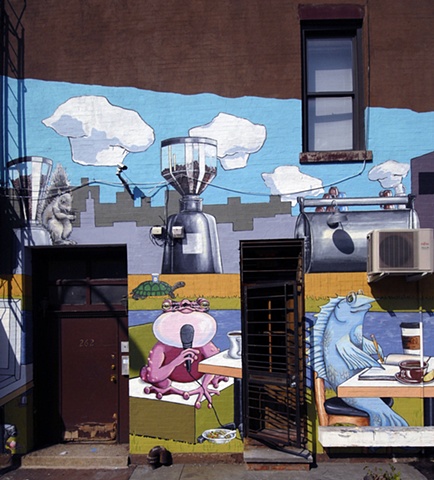 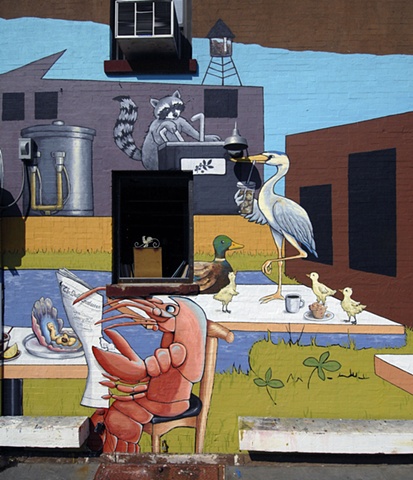 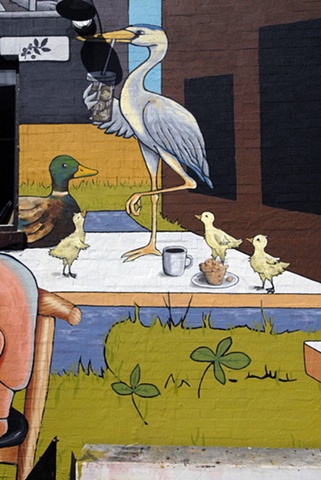 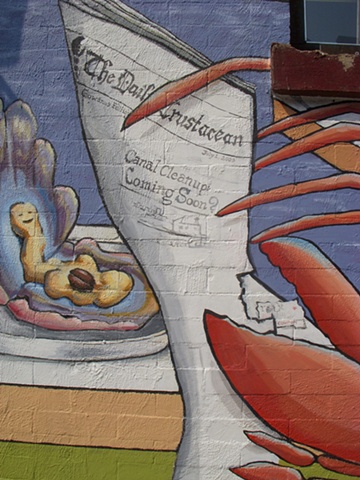 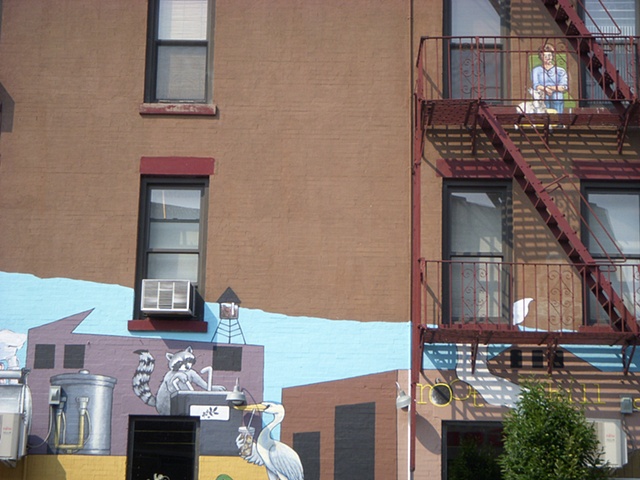 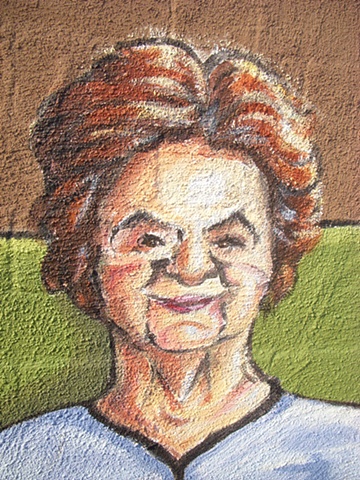 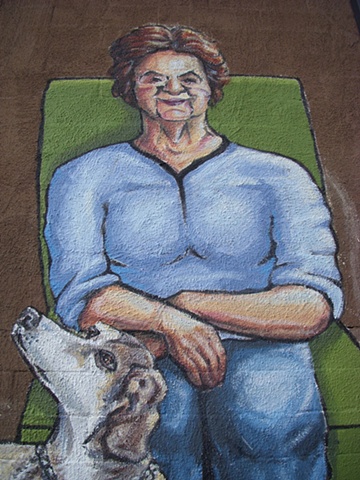 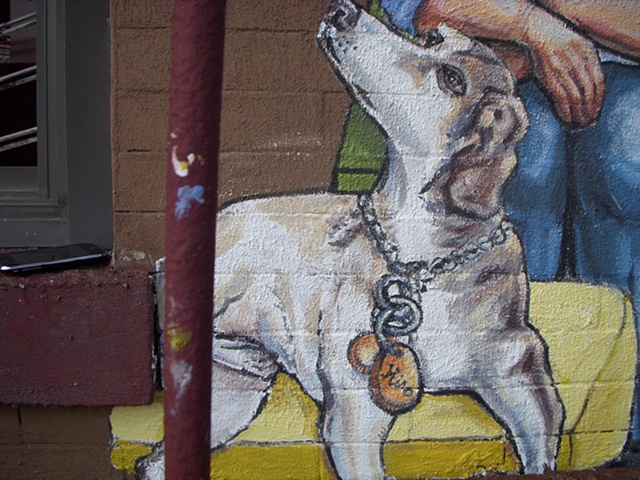 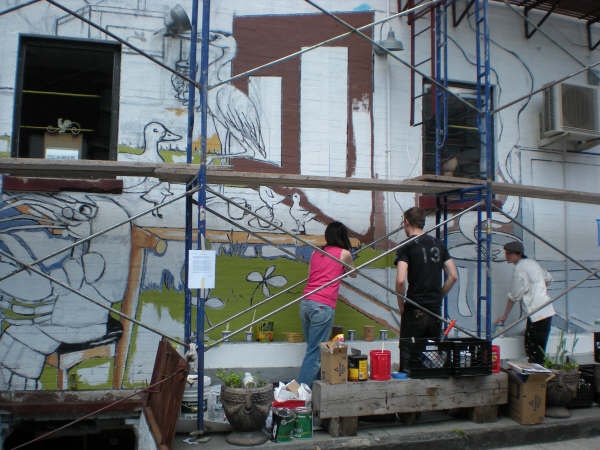 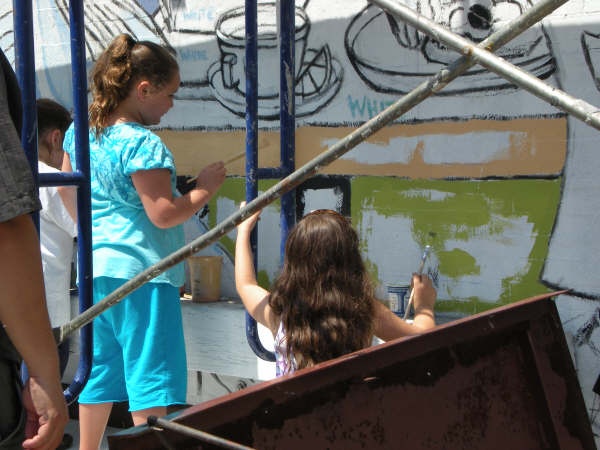 In-progress shot: we also worked with kids from a local school